Considering that there can’t be enough of Mistress Lexi Sindel, here are some of the links for you to follow: 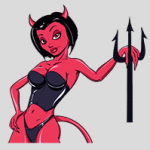